Southern Shrimp Alliance Trade CDSOA CBP Announces Intent to Make CDSOA Distributions in FY2016
On Tuesday, the Federal Register published U.S. Customs and Border Protection’s (“CBP”) “Notice of Intent to Distribute Offset for Fiscal Year 2016.”  Per the notice, certifications for fiscal year 2016 distributions must be received by the agency by August 1, 2016.
CBP posted on the agency’s website a preliminary report regarding Continued Dumping and Subsidy Offset Act (“CDSOA”) funds that may be available for distribution in FY2016.  For duties collected on shrimp imports, CBP reports a preliminary figure, current as of April 30, 2016, of $531,754.86 as available for distribution in FY2016.  This amount is a preliminary figure.  What is actually available for disbursement may be higher or lower depending on actions taken by CBP between now and fiscal year end (September 30, 2016).
In addition to antidumping duties collected on entries of shrimp imports made before October 1, 2007, CBP’s Federal Register notice explains that the recently enacted Trade Facilitation and Trade Enforcement Act of 2015 may result in additional funds distributed related to payments of interest, received between October 1, 2014 and September 30, 2016, made by sureties on bonds related to such imports.  The Federal Register notice explains:
Section 605 of theTrade Facilitation and Trade Enforcement Act of 2015(TFTEA) (Pub. L. 114-125, February 24, 2016), provides new authority for CBP to deposit into the CDSOA Special Account for distribution delinquency interest that accrued pursuant to 19 U.S.C. 1505(d), equitable interest under common law, and interest under 19 U.S.C. 580 for payments received on or after October 1, 2014, on CDSOA subject entries if the payment was made by a surety in connection with a customs bond pursuant to a court order or judgment, or a litigation settlement with the surety, including any payments made during the litigation by the surety with respect to the bond.
Surety payments received from October 1, 2014, through September 30, 2016, for which delinquency, equitable, and 19 U.S.C. 580 interest are subject to distribution under Section 605 of the TFTEA will be deposited into the Special Account during Fiscal Year 2016 for inclusion in the Fiscal Year 2016 distribution. Any domestic producer seeking distribution of interest as provided under Section 605 of the TFTEA for payments received from October 1, 2014, through September 30, 2016, must file a timely Fiscal Year 2016 certification. CBP will utilize the Fiscal Year 2016 certifications to determine each domestic producer’s pro-rata share of the assessed duties received during Fiscal Year 2016, the assessed 19 U.S.C. 1677g interest received during Fiscal Year 2016, as well as the interest provided for under Section 605 of the TFTEA for payments received from October 1, 2014, through September 30, 2016.
As there is no public accounting of payments made by sureties to CBP regarding custom bonds, it is unclear how much of any such payments of interest, if any, relate to shrimp imports.  Nevertheless, as set forth in the Federal Register, anyone eligible for a CDSOA distribution that seeks to obtain a share of interest payments made between October 1, 2014 and September 30, 2016 must file a timely fiscal year 2016 certification.
At the same time, the Federal Register notice also continues to warn applicants of the possibility that overpayments may be made in response to certifications and that the agency will seek to recover any such overpayments:
Moreover as provided in 19 CFR 159.64(b)(3), overpayments to affected domestic producers are recoverable by CBP and CBP reserves the right to use all available collection tools to recover overpayments, including but not limited to garnishments, court orders, administrative offset, enrollment in the Treasury Offset Program, and/or offset of tax refund payments. Overpayments may occur for a variety of reasons such as reliquidations, court actions, settlements, insufficient verification of a certification in response to an inquiry from CBP, and administrative errors.  With diminished amounts available over time, the likelihood that these events will require the recovery of funds previously distributed will increase. As a result, domestic producers who receive distributions under the CDSOA may wish to set aside any funds received in case it is subsequently determined that an overpayment has occurred. CBP considers the submission of a certification and the negotiation of any distribution checks received as acknowledgements and acceptance of the claimant’s obligation to return those funds upon demand.

Distributions to the shrimp industry from the CDSOA program began in fiscal year 2006.  In the last ten years, over $267 million in collected antidumping duties have been made available for distribution to the shrimp industry through CDSOA.  The total amount of duties collected on shrimp imports and distributed through CDSOA is summarized in the chart 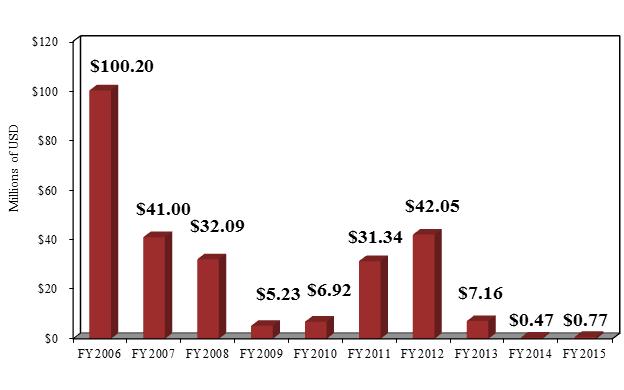