Earlier this year, opponents of trade relief told the domestic shrimp industry not to worry.  Before the U.S. International Trade Commission, we were informed that no harm would come from the removal of antidumping duties because the growing wealth of China would attract shrimp exports to the Chinese market.

I have heard the same story, peddled by the same people, while working to halt the circumvention of duties and FDA Import Alerts.  No worries, we are told, China is now a net importer of shrimp and has little interest in exporting to the United States.

The story of booming Chinese demand for shrimp and other seafood has become the cure for all that ails the U.S. seafood market.  It redirects dumped imports from our market to China’s, ensures that contaminated seafood only endangers Chinese consumers, raises prices globally by stretching supply, and offers American producers export opportunities to the Chinese market.  These truths are held to be self-evident and are repeated as such by industry analysts and trade publications.

Except it is hard to see how these claims can be true.

Last year, Chinese exporters shipped (officially) over 100 million pounds of shrimp products to the United States.  This is considerably below what was shipped in 2003 when we first sought trade relief. But, because of rampant false labeling and origin designation of Chinese shrimp products, official numbers are suspect and it is tough to get a real sense of how much Chinese shrimp is actually in our market. 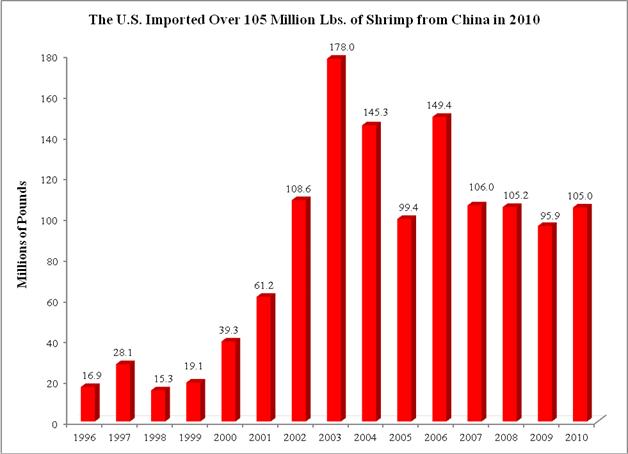 Chinese shrimp continued to be a significant presence in our market this year as well.  With import figures available through September, we have already imported nearly 64 million pounds of shrimp from China, worth roughly $193 million, this year – amounts that are 10% below the comparable 2010 totals in terms of volume, but 11% higher in terms of value.

Yet, because of widespread fraud, looking at shrimp import statistics fails to convey how massive China’s presence has become in the seafood market.  To fully appreciate China’s growth and dominance, you would have to look at our country’s import stats for all Chinese seafood products.

Fifteen years ago, China exported 224 million pounds of seafood to the United States, worth $285 million.  Last year, the total amount of seafood officially imported into the U.S. from China increased to 1.24 billion pounds, worth nearly $2.4 billion. 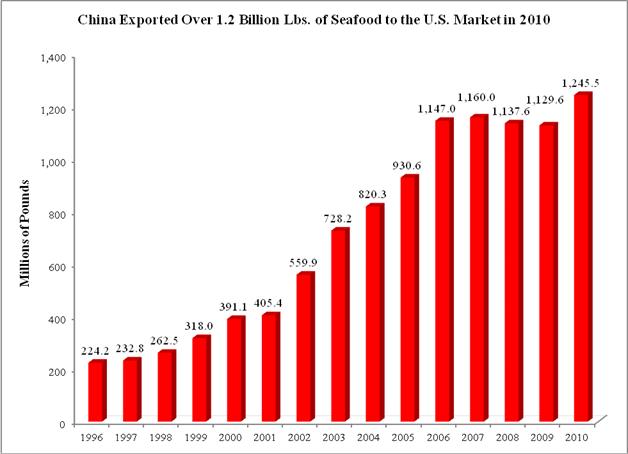 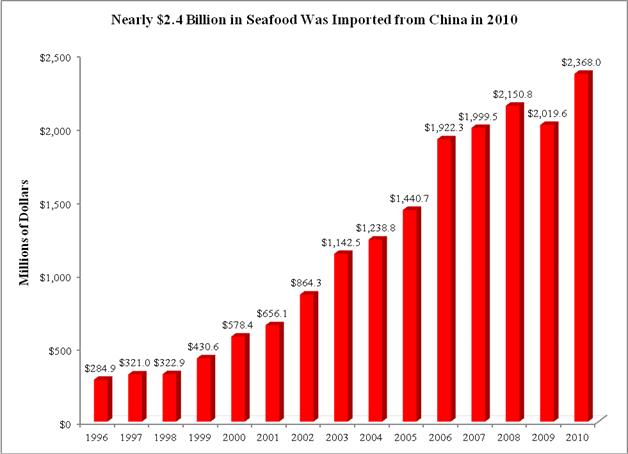 So far this year, through September, the total volume of Chinese seafood imports is roughly the same as 2010, while the value of those imports has increased to over $1.8 billion dollars – an increase of 13% compared to last year.

Massive export growth to the U.S. market is a familiar story for Chinese industries, but the explosion of Chinese seafood exports to the United States is uniquely remarkable.

This growth has come despite serious concerns about the safety of Chinese seafood products. This is reflected most strongly in the FDA’s Import Alert on farmed shrimp, catfish, basa, dace, and eel from China, resulting from the repeated detected presence of banned harmful antibiotics and antifungals in these imports (Import Alert 16-131).  An academic paper written by scientists at the John Hopkins Bloomberg School of Public Health and published in July confirmed those concerns, finding that seafood from China accounted for a large percentage of the veterinary drug inspection violations reported by regulatory agencies. These violations “account[ed] for 34% of Canadian, 28% of Japanese, 23% of U.S., and 15% of E.U., violations . . . .”

Despite the ever-increasing volumes of Chinese seafood in our marketplace, problems with aquacultural production in China have not been meaningfully addressed.

Just in the last month, the FDA’s OASIS system reports that the agency refused multiple shipments of seafood from China for the presence of banned antibiotics.  Specifically, OASIS reports that the FDA:

1)      refused a shipment of frozen cooked white shrimp from Zhangzhou Yanfeng Aquatic Product on October 20th because of the presence of veterinary drug residues (Refusal NS7-0024685-4/1/1);

2)      refused a shipment of frozen cooked white shrimp from Guangdong Jinming Plastics Equipment Co. on October 20th because of the presence of nitrofurans (Refusal NS7-0024676-3/1/1);

Believe it or not, the number of refusals of seafood shipments from China for veterinary drug contamination was actually down in October.  In September, OASIS reported sixteen refusals, including the refusal of a shipment of frozen cooked shrimp from Zhanjiang Regal Integrated Marine Resources Co. Ltd. for veterinary drug residues on September 21st (Refusal 991-0182814-5/1/1).

And it is not just our market.  According to the European Union’s Rapid Alert System for Food and Feed (RASFF) database, Sweden notified the EU on Oct. 25, 2011 that raw Chinese shrimp had been withdrawn from the market after finding nitrofurans in a sample of the consignment (reference 2011.1499).  In September, Belgium notified the EU of findings of nitrofurans in another consignment of shrimp from China (reference 2011.1277).

There is no question that dramatic changes are occurring in China and that the nation’s wealth has grown substantially over the last several years.  Yet, even with those changes, the U.S. market remains awash in Chinese seafood and there is little indication that this trend will reverse itself in the near term.  At the same time, the problems with contaminated Chinese seafood exports persist and there appears to be no serious, sustained effort to address the issue.

So here’s the point:  China’s not going away.  And the problem of contaminated imports sold cheaply into this market is not getting better.

And here’s even more bad news:  there are no easy solutions.  When we won antidumping duties, Chinese exporters and some U.S. importers responded by massively circumventing that trade relief.  When the FDA clamped down on dangerous farmed seafood imports, including shrimp, we saw even more circumvention.

But here’s the good news:  shrimpers have never been afraid of a little hard work. As much as importers seek to dismiss us as protectionists, facts are facts and fair is fair.  We are, and remain, a highly-regulated industry that has been forced to compete with folks with little respect for the law.  That seems to me like a challenge, and one that the Southern Shrimp Alliance is not going to shy away from.