Southern Shrimp Alliance Trade Antibiotics and Additives GAO Report Asks Why FDA Won’t Ask Foreign Suppliers to Do More to Stop Shipments of Contaminated Seafood
Over the last several years, the U.S. Food and Drug Administration (“FDA”) has significantly increased the agency’s testing of imported shrimp for banned antibiotics.  According to data released by the FDA to the Southern Shrimp Alliance in response to a Freedom of Information Act request, the number of tests conducted by the agency has increased tenfold since the beginning of this century: 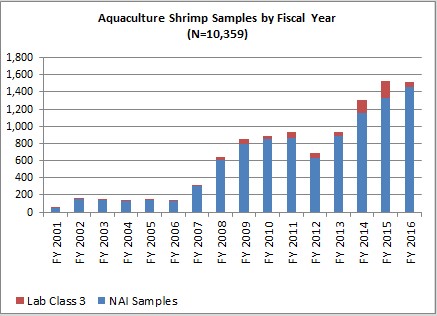 As testing has increased, detection of banned antibiotics in shrimp has remained significant, as shown in the table below: 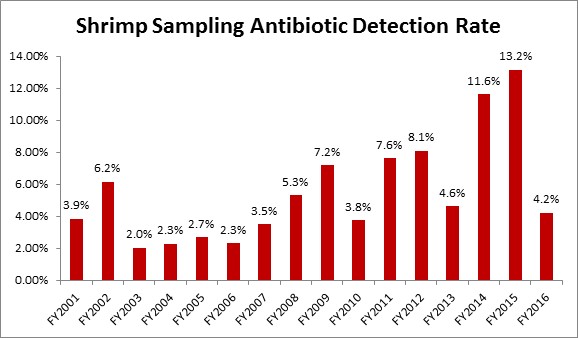 With more testing for banned antibiotics and higher detection rates, the FDA might be expected to have taken a more aggressive approach to eliminating the use of antibiotics in aquaculture.  Yet a report made public yesterday by the U.S. Government Accountability Office (“GAO”), Imported Seafood Safety:  FDA and USDA Could Strengthen Efforts to Prevent Unsafe Drug Residues (GAO-17-443, Sept. 2017), indicates that the FDA has not changed its approach.
Even with increased sampling of shrimp imports, the FDA sampled just 0.1 percent of all seafood entry lines for the presence of banned antibiotics in fiscal year (FY) 2015, as shown in Figure 3 of the report: 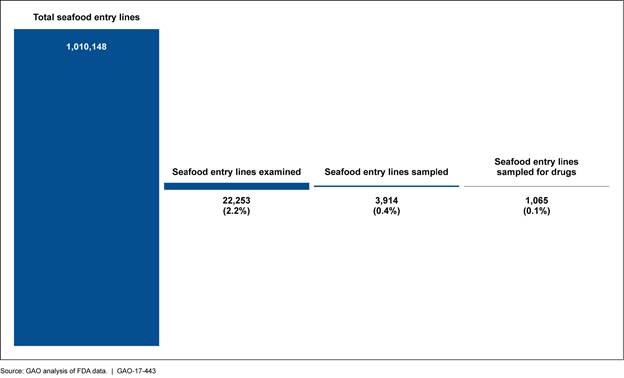 Instead of testing, the FDA relies upon processor and importer compliance with regulations regarding Hazard Analysis Critical Control Point (HACCP) to limit the exposure of American consumers to potentially harmful antibiotics.  Effectively, this means that the FDA relies upon importers to ensure the safety and wholesomeness of imported seafood introduced into the U.S. market.
But the GAO’s report indicates that there is significant reason to doubt importers’ adherence to the HACCP regulations.  The GAO explains that for FY2010 through FY2015, the FDA inspected, on average, 178 seafood importers annually – an amount equivalent to four percent of the average number of seafood importers registered with the FDA each year over that six-year period.  The GAO selected nine inspections to review at random, a process that the oversight body notes is a non-generalizable sample.  Nevertheless, of the nine, the FDA found that five could “not identify the affirmative step taken to document that the foreign processors supplying some or all of that importer’s seafood products were in compliance with HACCP requirements.”  More disturbingly, “[i]n some cases, the inspection report also noted that an earlier FDA inspection had also found that the importer had failed to identify an affirmative step that was required in order to comply with HACCP regulations.”  This means that a small, random pull of FDA’s inspection reports found evidence of repeated non-compliance with HACCP regulations by a seafood importer.
In the data that the GAO reviewed, the FDA reported that it had taken 550 shrimp samples for drug testing in FY2015 and that, of those, 67 were found to have the presence of unsafe drug residues.  That’s the equivalent of a 12.2 percent violation rate.  The GAO notes that during FY2015, the United States imported 1.3 billion pounds of shrimp.  The violation rate, if applied to all shrimp imports during that year, implies that roughly 158 million pounds of contaminated shrimp entered the United States during that fiscal year.
The GAO report indicates that this would not have been a surprise to the FDA given what the agency had seen in the ten foreign country assessments conducted regarding drugs in aquaculture in eight countries between 2006 and December 2016.  Although these assessments do not appear to be available to the public – in marked contrast with the European Union – the GAO reviewed these documents.  The GAO observes that in the FDA’s 2013 country assessment of aquaculture in Ecuador, “FDA staff visiting two fish farms in that country discovered that the farms were using an antibiotic on shrimp that FDA had not approved for that product.”
Moreover, according to the GAO, the FDA was repeatedly informed during these country assessments that a foreign trading partner could do more to prevent the export of contaminated shrimp if the agency would implement additional requirements.  In 2012, Vietnam informed the FDA that under its new food safety law, it could “only conduct mandatory consignment testing when required by formal agreement with the receiving country.”  While Vietnam had such agreements with Canada, Japan, South Korea, and the European Union, no such agreement existed with the United States.  In 2010, the Indian government informed the FDA that the type of testing done on seafood exported to the European Union could also be done on seafood to be exported to the United States if the FDA required that such shipments be accompanied by a health certificate.  While Japan and South Korea, in addition to the European Union, required health certificates with Indian seafood shipments, the United States does not.  In 2013, the government of Ecuador informed the FDA that the country’s drug residue plan was voluntary “except in cases where Ecuador has a formal agreement with another country.”  While Ecuador has such agreements with Argentina, Brazil, China, the European Union, and Russia, it has no such agreement with the United States.  The GAO explains, “[a]s a result, shrimp or tilapia that cannot be shipped to EU countries because of concerns about violative drug residues may be shipped to the United States.”
Based on these findings, the GAO recommended that the FDA pursue formal agreements with countries exporting seafood to the United States.  In response, the FDA indicated that it “partially” agreed with the GAO.  Noting that the agency has not “received any requests to establish this type of arrangement,” the FDA asserted that “[f]actors outside the agency’s control . . . could limit robust implementation of this recommendation . . . .”  The agency concluded its discussion of the GAO’s recommendation by indicating that nothing was likely to change:  “FDA will continue to use its existing tools to ensure the safety of seafood imported into the United States and, in the event an arrangement is signed, may consider appropriate modifications.”
“The question the GAO is asking is important:  if other countries say they are willing to do more to prevent their exporters from shipping shrimp contaminated with banned antibiotics to the U.S. market, why aren’t we taking them up on their offers?,” said John Williams, Executive Director of the Southern Shrimp Alliance.  “While we greatly appreciate the FDA’s increased scrutiny of shrimp imported into the U.S. market, the continued detection of banned antibiotics in these shipments demonstrates that there is more to be done.  Refusing to enter into bilateral agreements that foreign suppliers already are willing to commit to with other trading partners as a condition of access to their markets makes no sense and, worse, firmly establishes the United States as the dumping ground for contaminated shrimp produced around the world.”
Read the full GAO report here:  https://www.gao.gov/products/GAO-17-443