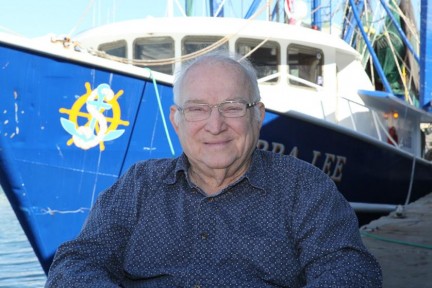 Rodney Thompson, 86, passed away peacefully at home on Friday, October 21st following a long, courageously fought battle with normal pressure hydrocephalous. He was a life-long resident of Titusville except for a stint as a cook in the U.S. Air Force during the Korean War.

Rodney is preceded in death by his parents Herbert and Fay Thompson, brother Herbert James, and son Timothy. He is survived by his wife of 66 years, Mary Jean, son Thomas (Lisa), daughter, Laurilee, and daughter, Sherylanne Thompson McCoy, 5 grandchildren, 8 great grandchildren (plus one on the way), and four beloved cats.

When the new concrete bridge replaced the old wooden Walker Bridge in 1949, his father leased a portion of the old wooden bridge. Rodney and his dad built a bait shop and extended the structure which became known as the Titusville Pier “the World’s Longest Free Fishing Pier”. He started a small boat dealership adjacent to the Pier.

Rodney raced boats in the early 1960’s for Carl Kiekhaefer who was the founder of Kiekkhaefer Mercury Marine (which later became Mercury Marine). A pioneer in the fiberglass boat-building industry, Rodney built the world’s first fiberglass commercial shrimp boat. The boat was initially panned by the traditional shrimpers who said ‘If God wanted boats to be made out of fiberglass he would have made fiberglass trees.’

He was actively involved in all aspects of the domestic commercial fishing industry from manufacturing commercial fishing boats to pioneering the rock shrimp industry, operating seafood restaurants and markets. He started T-Craft Boats, Thompson Trawlers, Offshore 30, Thompson Industries, Sand Point Inn, Pelican Point Inn, Ponce Seafood, Dixie Crossroads Seafood Restaurant, Cape Canaveral Shrimp Company and Wild Ocean Seafood Market.
He was a long-time member of the Board of Directors of the Southeastern Fisheries Association. He served on committees for the South Atlantic Fisheries Council, the Florida Seafood Advisory Board, and the Florida Seafood Marketing Board. The Thompson family was the first non-agricultural recipient of the Brevard County Farm Family of the Year designation for their work in the Florida seafood industry.

He was quietly involved behind the scene with numerous community affairs. He personally felt one of his greatest accomplishments was the honor of receiving Titusville’s Harry R. Lee
Unity Award for community service.