Today SSA met with Assistant Secretary of Commerce Dr. Larry Robinson, Assistant Administrator for Fisheries Eric Schwaab, NMFS Southeast Regional Administrator Roy Crabtree and several other NOAA fisheries officials as part of its comprehensive effort to defend the shrimp fishery against efforts by environmental groups to shut down the fishery due to turtle strandings.

This meeting culminates a series of such meetings held by SSA with senior government officials to address head-on their concerns with the unusual number of Kemp’s Ridley turtle strandings in 2010 and 2011, and TED compliance issues in the shrimp fishery. These concerns have generated two petitions to shut down the fishery as part of two letters of intent to file suit against NMFS under the Endangered Species Act to force draconian regulatory measures on the shrimp fishery by several environmental groups led by the Center for Biological Diversity and Oceana.

These ENGO’s seem to believe that it is just an incredible coincidence that an unusual number of sea turtles are showing up dead on Gulf coast beaches after the worst oil spill in the history of man. They barely mention the historic volumes of spilled oil or toxic dispersants. They ignore the at-sea burns and the massive dredging project to build shoreline berms. They just want to hang the shrimp fishery. This is a very serious threat to thousands of jobs throughout the Gulf region-and we are taking it very seriously by holding these meetings.

During today’s meeting, NOAA’s Southeast Regional Administrator Dr. Roy Crabtree provided SSA with its just-released letter denying the two petitions filed by the Center for Biological Diversity and Turtle Island Restoration Network filed in April and May. NOAA petition denial letter 7-29-11These petitions requested the agency to use its emergency authority to shut down the shrimp fishery immediately, impose 100 % observer coverage, and require TEDs on all skimmer trawls among other unjustified measures. In his letter, Dr Crabtree states: “Given the actions already taken and the reduction in strandings levels from the April peak, we do not believe that an emergency action is warranted.” The letter reflects much of the same information and arguments presented by SSA in its meetings with the agency over the past 2 months. In addition, the detailed letter will substantially undermine the basis for any lawsuits these groups and Oceana have threatened to file. This represents a very major victory for the shrimp industry and a major blow to the groundless threats from the environmental community. SSA is hopeful that the agency will reject the Oceana petition on similar grounds

SSA performed extensive analyses on federal and state data on shrimp fishing effort and turtle strandings in 2010 and 2011 which show that most occurred when the shrimp fleet was at the dock. Most of the strandings occurred in March, April and May before any meaningful level of inshore fishing activity begins for the year. (see charts below)

Although strandings did increase immediately after the Mississippi season opened in June 2010, that pattern was not repeated in 2011. This confirms that 2010 was an aberration in many ways. In this case, numerous state and federal fishery closures made in response to the spill fundamentally altered the normal pattern of where and when shrimp fishing occurred and some scientists have speculated that the spill may have also affected the normal behavior and distribution of sea turtles; creating a unique concentration of both turtles and shrimpers in the same time and place in June 2010.

The majority of the data shows a real disconnect between where and when stranded turtles were found and the presence of shrimp fishing anywhere in the vicinity. It looks like what happened in 2010 was a one-time event and that there is something else going on out there in the spring of each year that is causing turtles to be stranded. I believe this has made a real impression on NOAA and NMFS and is leading them to think very hard about shutting down our fishery, or even whether a requirement to use TEDs in skimmer trawls would be justified. I want to thank our state fishery officials in Mississippi and Louisiana for providing us with some of the most critical data used in these analyses.

SSA also has raised very serious questions about the scientific validity of conclusions drawn by the agency from the necropsies performed on some of the dead turtles. The vast majority of these turtles were in a state of moderate or severe decomposition, yet the sole NMFS veterinarian charged with performing nearly all of these necropsies has concluded that the presence of fluids and sediment in the lungs means that the turtles died from “forced submergence” in shrimp trawls. It appears that these necropsies have been performed without any meaningful oversight, peer review or corroboration with other forensic experts.

Perhaps the most obvious flaw is that sediment was found in the lungs of a number of turtles found stranded during March 2011 when there were only 2 shrimp trawl vessels operating in the area-both of which were inspected by the Mississippi Department of Marine Resources and found to be in full compliance with federal TED requirements.

If sediment is found in the lungs of stranded turtles both in the presence and absence of shrimp fishing, then it is obvious that sediment is not valid evidence that shrimp fishing killed the turtles. This should make any credible scientist seriously question these conclusions and look for other reasons for why these turtles may have drowned-or if they drowned at all. I can tell you it certainly makes me question the integrity of this whole necropsy process and wonder why there appears to be such a strong desire by some in the agency to only point to the shrimp fishery instead of looking at the oil spill and so many other possible causes for the strandings.

SSA also has evaluated the analysis used by Oceana to justify their petition to close the fishery and found it to be fundamentally flawed. This analysis improperly attempts to use the results of ‘courtesy inspections’ performed by the NMFS Gear Management Team and Office of Law Enforcement to work cooperatively with fishermen to identify technical problems with their TEDs, typically in advance of the fishing season or during the first few weeks. The entire purpose of this voluntary system is to help fishermen ensure that they will be in full compliance when they leave the dock to go fishing.

By definition, there will be problems found, but that does not translate to these same problems occurring on the water when those fishermen are actually fishing throughout the season. Quite the opposite. Everyone of those vessels can be expected to leave the dock in full compliance-and that is, in fact, what we are seeing in the fishery. Compliance rates have risen sharply.

As a result of SSA’s meetings with NMFS officials, it became clear there is no scientific sampling protocol employed for conducting courtesy inspections and that the data gathered is not intended for scientific purposes. Consequently, there is no valid statistical basis for Oceana to use this data to extrapolate compliance rates when vessels are actively fishing or to extrapolate the number of actual turtle mortalities in the fishery. This data is simply not representative of actual compliance in the fishery and cannot be used for the purposes of Oceana’s analysis to shut down the fishery.

This is typical abuse of so-called science by the ENGO’s lawyers. They will say or do just about anything to put fishermen out of business and this is a classic case. As in all walks of life, compliance problems do occur, but the shrimp industry has a long and highly regarded record for protecting turtles and for its award winning work to help restore the Kemps Ridley turtle population; among the most endangered turtle species now experiencing exponential growth due to these efforts.

Still, SSA remains very concerned about compliance and the need for the industry to take full responsibility for correcting any legitimate problems.

Deliberate efforts to skirt TED rules are unacceptable and hurt everyone in the fishery. Being in compliance is one very clear way our fishery can prove we are not the cause of an unusual number of turtle strandings. Being out of compliance just hands groups like Oceana a weapon with which to attack us. We can’t just look the other way when we see someone out of compliance. We all have to take responsibility for the fishery.

SSA is conducting a series of 23 meetings in ports throughout the Gulf and South Atlantic including 8 in Louisiana next week to deliver this message. In addition, it has issued several email alerts reaching thousands in the industry imploring them to do what is necessary, including working with NMFS gear experts, to ensure that they are in full compliance when they leave the docks.

We are doing everything we can as an organization, but a solid, sustained enforcement presence, along with consistency of TED regulation checks among the various state and federal agencies, is the most effective deterrence to non-compliance. I hope the agency’s leadership will hear our message and from its own experts in the field by committing the resources they need to get the job done. I know these guys. Their goal is not to just write tickets. Like us, their goal is to achieve compliance and protect turtles.

SSA plans to continue to work cooperatively with NMFS and NOAA officials as it has for years on sea turtle and other issues involving the shrimp fishery. Similar efforts by SSA have successfully avoided proposed fishery closures due to the bycatch of red snapper and sharks as well as interactions with deep sea corals. An important part of SSA’s approach to has been to secure several million dollars in federal funding from Congress for the development of an electronic logbook program that provides a precise record of shrimp fishing effort used to avoid bycatch and vastly improve the precision of federal scientific analyses of bycatch and the population assessments of bycatch species.

SSA has an extraordinary record of taking full responsibility for legitimate problems in our fishery, but we expect both the problems and the solutions to be based on solid science-not political agendas. So far, there are real questions in the agency’s stranding, necropsy and shrimp fishing effort data and this generates real questions about whether this data should be used to justify long term management decisions notwithstanding groundless legal threats from the ENGO’s. Last year was an aberration in many ways and I think this is a real consideration for the fishery managers. 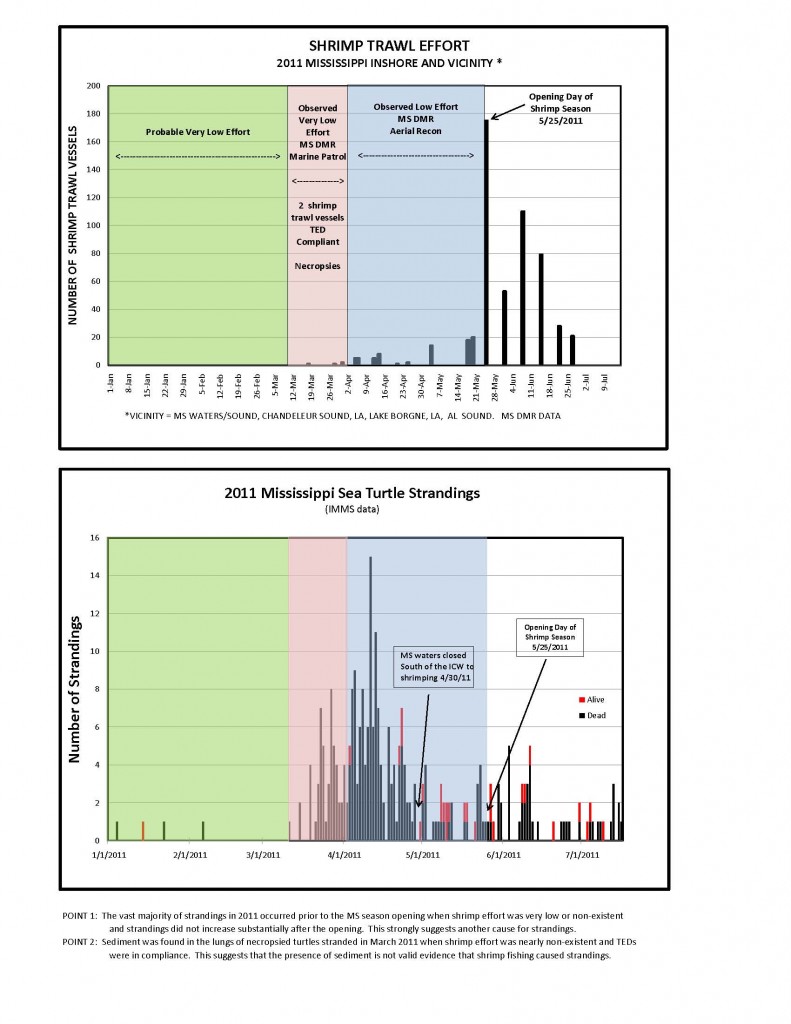 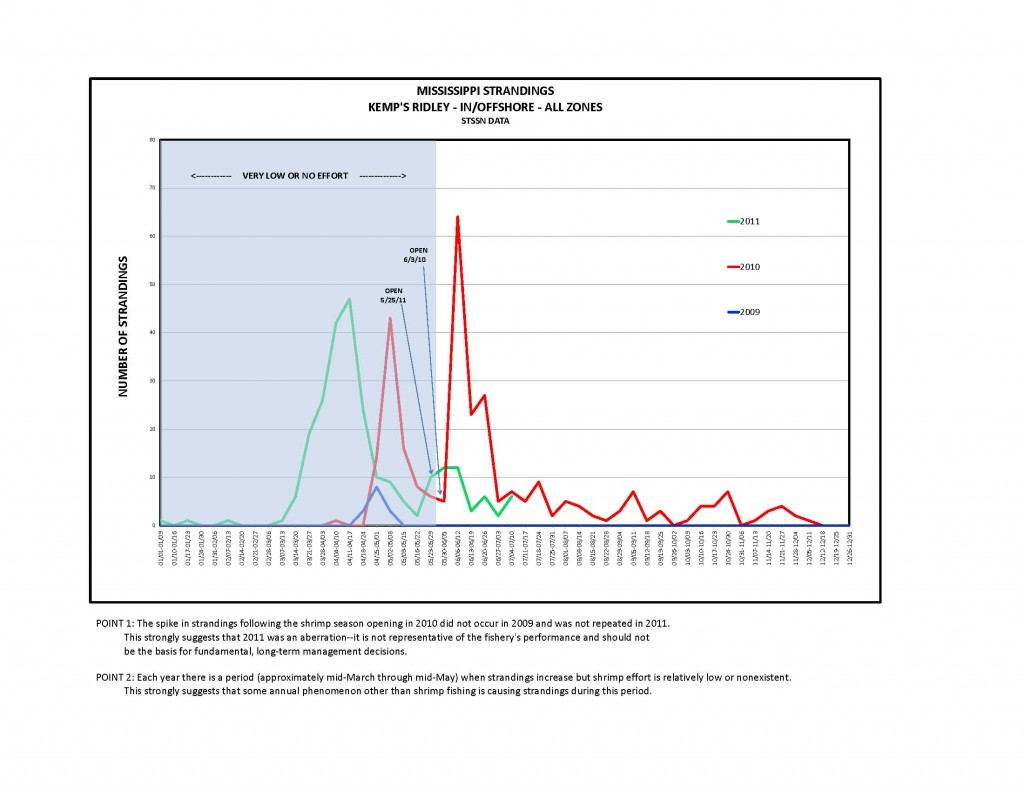 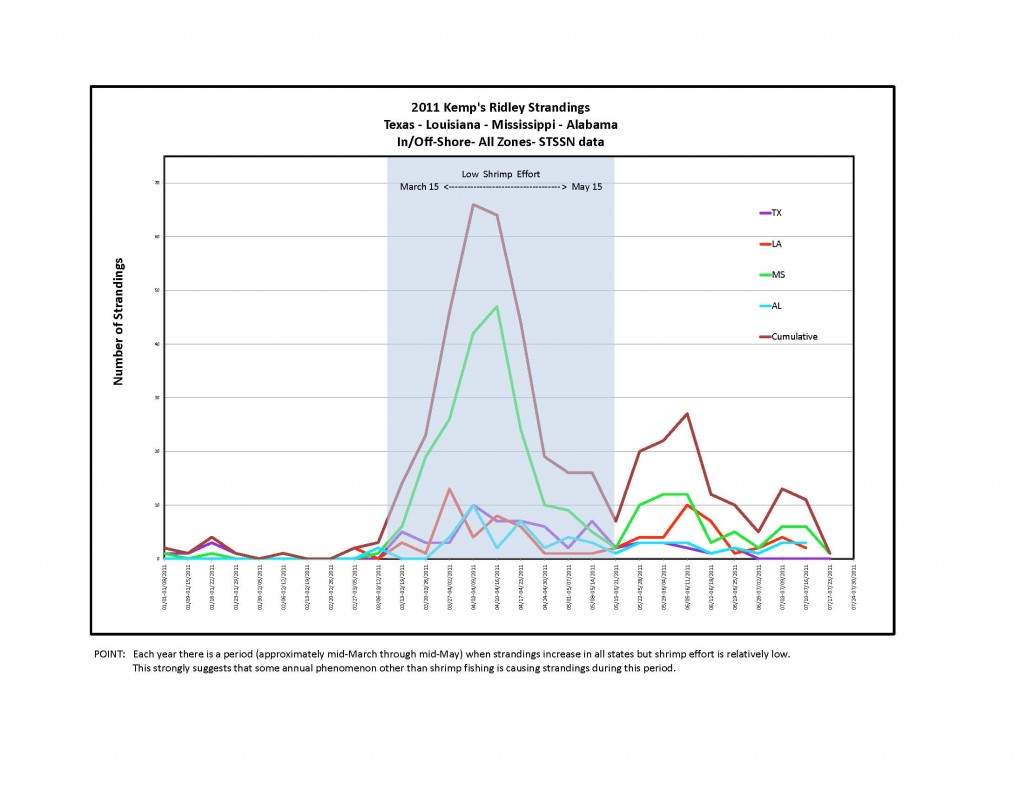